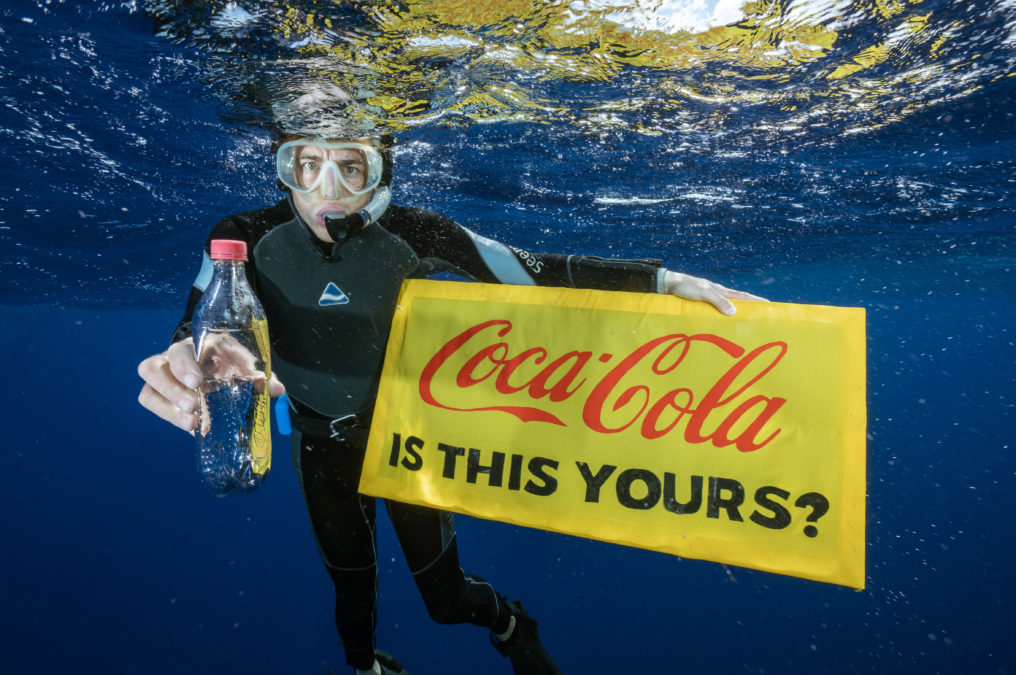 Coca-Cola, PepsiCo, and Nestlé were the most frequent companies identified in 239 clean-ups and brand audits spanning 42 countries and six continents, the Break Free From Plastic movement announced today. Over 187,000 pieces of plastic trash were audited, identifying thousands of brands whose packaging relies on the single-use plastics that pollute our oceans and waterways globally. Coca-Cola was the top polluter in the global audit, with Coke-branded plastic pollution found in 40 of the 42 participating countries. This brand audit effort is the most comprehensive snapshot of the worst plastic polluting companies around the world.

“These brand audits offer undeniable proof of the role that corporations play in perpetuating the global plastic pollution crisis,” said Global Coordinator of Break Free From Plastic, Von Hernandez. “By continuing to churn out problematic and unrecyclable throwaway plastic packaging for their products, these companies are guilty of trashing the planet on a massive scale. It’s time they own up and stop shifting the blame to citizens for their wasteful and polluting products.”

“These brand audits offer undeniable proof of the role that corporations play in perpetuating the global plastic pollution crisis. By continuing to churn out problematic and unrecyclable throwaway plastic packaging for their products, these companies are guilty of trashing the planet on a massive scale. It’s time they own up and stop shifting the blame to citizens for their wasteful and polluting products.”

The audits, led by Break Free From Plastic member organizations[1], found that Coca-Cola, PepsiCo, Nestlé, Danone, Mondelez International, Procter & Gamble, Unilever, Perfetti van Melle, Mars Incorporated, and Colgate-Palmolive were the most frequent multinational brands collected in cleanups, in that order. This ranking of multinational companies included only brands that were found in at least ten of the 42 participating countries. Overall, polystyrene, which is not recyclable in most locations, was the most common type of plastic found, followed closely by PET, a material used in bottles, containers, and other packaging.

The top polluters in Asia, according to the analysis, were Coca-Cola, Perfetti van Melle, and Mondelez International brands. These brands accounted for 30 percent of all branded plastic pollution counted by volunteers across Asia. This year’s brand audits throughout Asia build upon a week-long cleanup and audit at the Philippines’ Freedom Island in 2017, which found Nestlé and Unilever to be the top polluters.

“We pay the price for multinational companies’ reliance on cheap throwaway plastic,” said Greenpeace Southeast Asia – Philippines Campaigner, Abigail Aguilar. “We are the ones forced to clean up their plastic pollution in our streets and waterways. In the Philippines, we can clean entire beaches and the next day they are just as polluted with plastics. Through brand audits, we can name some of the worst polluters and demand that they stop producing plastic to begin with.”

In North and South America, Coca-Cola, PepsiCo, and Nestlé brands were the top polluters identified, accounting for 64 and 70 percent of all the branded plastic pollution, respectively.

“In Latin America, brand audits put responsibility on the companies that produce useless plastics and the governments that allow corporations to place the burden, from extraction to disposal, in mostly vulnerable and poor communities,” said GAIA Coordinator for Latin America, Magdalena Donoso. “BFFP members in Latin America are exposing this crisis and promoting zero waste strategies in connection with our communities.”

“We pay the price for multinational companies’ reliance on cheap throwaway plastic. We are the ones forced to clean up their plastic pollution in our streets and waterways.”

“These brand audits are putting responsibility back where it belongs, with the corporations producing endless amounts of plastics that end up in the Indian Ocean,” said Griffins Ochieng, Programmes Coordinator for the Centre for Environment Justice and Development in Kenya. “We held clean-ups and brand audits in two locations in Kenya to identify the worst corporate polluters in the region and hold them accountable. It is more urgent than ever, for the sake of communities that rely on the ocean for their livelihoods, health and well-being, to break free from plastic.

Break Free From Plastic is calling on corporations reduce their use of single-use plastic, redesign delivery systems to minimize or eliminate packaging, and take responsibility for the plastic pollution they are pumping into already strained waste management systems and the environment.

While the brand audits do not provide a complete picture of companies’ plastic pollution footprints, they are the best indication to date of the worst plastic polluters globally. The Break Free From Plastic movement is urging companies to end their reliance on single-use plastics, prioritizing innovation and alternative delivery systems for products.